Key facts – the capital is Thiruvananthapuram (Trivandrum), and the main language spoken is Malayalam. The official state emblems are: animal: the elephant; bird: the hornbill; flower: the kannikona; fruit: the jackfruit; tree: the coconut. More than half the population are Hindu, with Muslims and Christians representing the majority of the remainder.  Temples and churches abound, and many are well worth visiting for their history and architecture.

Kerala is a wonderful place to holiday with its lush green landscapes and golden beaches, its amazing temple festivals, the beguiling backwaters, its fascinating history, and unusual and unique places to stay. It runs to the tip of South India down the Malabar coast, wedged between the Arabian Sea and the Western ghats, and its humid equatorial tropic climate is influenced by both the south west and north east monsoons.  There are cool and rugged mountains to its east, rolling hills in the middle and a flat coastal belt to the west.  The coastal belt is crisscrossed by canals, lakes and estuaries which form the Kerala backwaters.  Lake Vembanad is the largest of the lakes and dominates the backwaters, running from Allapuzha to Kochi over an area of 77 square miles.

The region was a prominent spice exporter from as early as 3000 BCE and Kerala is still known as the “The Spice Garden of India”. In ancient times Kerala’s spices attracted Babylonians, Assyrians and Egyptians and the Malabar coast also later became important to the Romans and the Greeks for its spices, especially for black pepper. Roman ships used to come laden with gold in exchange for pepper.  The Jewish connection with the area also began in the latter centuries BC, and their few remaining descendants are still present in Jew Town, where you can visit the fascinating Jewish synagogue .

In the 15th century the spice trade attracted the Portuguese to Kerala, culminating in Vasco Da Gama’s arrival.  This helped to pave the way for the European colonisation of India, and the Portuguese were ousted by the Dutch East India Company. In 1766 Hyder Ali, the ruler of Mysore and the father of Tipu Sultan ceded the area to the British after unsuccessfully launching a campaign against the British East India Company. By the end of the 18th century, the whole of the region was under British Rule and in Fort Kochi there is still much architectural evidence of their presence.  After India’s independence in 1947, Kerala State was later formed by merging areas of Cochin, Travancore, Malabar and Kasargod.

Kerala has an extremely high literacy rate, and it is described as a “remittance” economy, with many emigrants working in the Gulf States and sending their earnings home, evidenced by many village palm leaved huts being replaced by 3 storey mansions over recent years.  Kerala’s key industries are coir, handlooms, and handicrafts, and it produces most of the national output of pepper and rubber.  It has a booming tourist industry, and as with many other states in India, its IT industry is developing fast around its capital.

Kochi is one of Kerala’s main cities, and straddles the Kerala backwaters, encompassing the north end of a peninsula, several small islands(including Willingdon Island) and a portion of the mainland. It comprises 3 main urban areas, namely Ernakulam (on the mainland), Mattancherry and Fort Kochi, and has a tropical monsoon climate. It has an amazing colonial history which has helped to give it its’ unique appeal.

Cochin, known as the “Queen of the Arabian Sea” was a spice trading centre on the west coast of India from the 14th century. Originally it was an insignificant fishing village, but in 1530 the Rajah of Kochi gave this territory to the Portuguese who built a fort there to protect their commitment. The area remained under Portuguese influence for 160 years until 1683 when the Dutch destroyed the fort and built their own settlement and a wooden church. This was rebuilt in 1516 as St Francis Church, believed to be the first church built by Europeans in India and Vasco da Gama’s remains were originally buried there before being returned to Lisbon for re-interment. 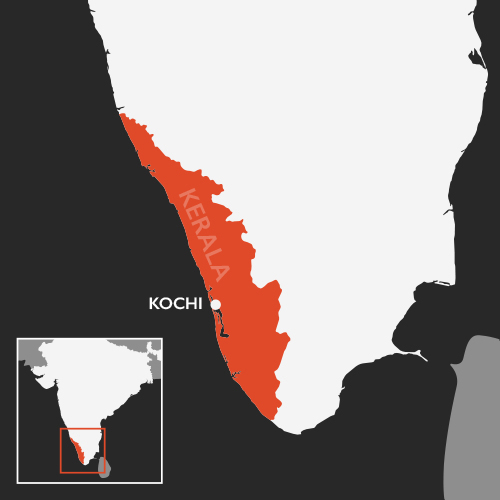 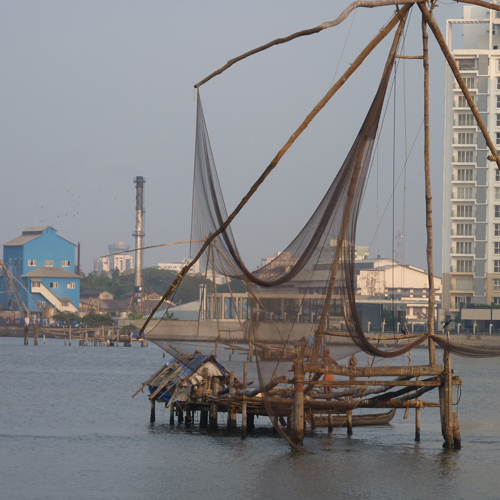 In 1795 the Dutch handed Kochi to the British as part of a political settlement, and the British influence continued for centuries, through India’s Independence and on into the 1960’s. Earlier in the 20th century trade at the port increased substantially and so Lord Willingdon, the then Governor of Madras brought harbour engineer Robert Bridstow to Kochi and over the following 21 years the harbour was expanded and rebuilt, including reclaiming the inner harbour where ships now berth. Kochi is one of India’s major seaports due to being one of the safest harbours in the Indian Ocean, and offers facilities for cargo and passenger ships, oil tankers, storage, ferries and a myriad of fishing boats. It is also home to the southern command of the Indian Navy, and is the state headquarters of the Indian Coastguard. Over recent years Kochi has rapidly commercialised and the scale of urban development along Marine Drive on the mainland is nothing short of astonishing. 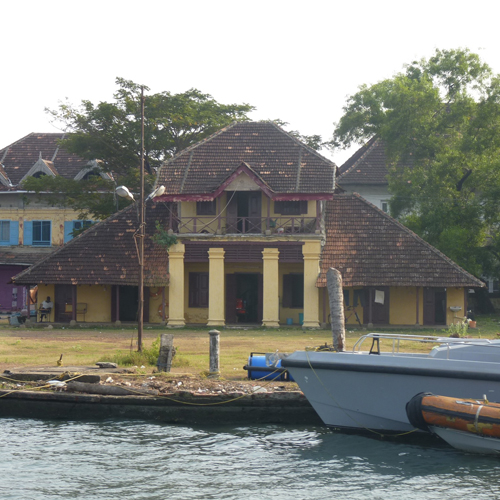 Fort Kochi was also home to many British tea company employees, their head offices and the main tea broking and auction houses. It is many of these old buildings which have been restored into the nostalgic boutique guest houses and heritage hotels which we can now enjoy as visitors – bringing something back to the area’s prosperity.

Today, Fort Kochi in particular is a buzzy, fascinating and unique place to stay and explore. Its climate is more humid, but it is well worth spending your time there to experience all it has to offer. 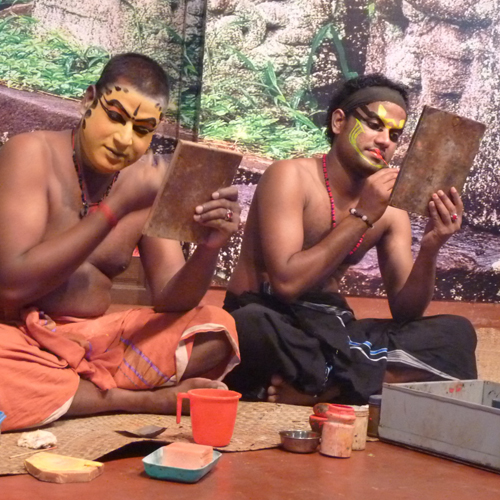