In sight of the permanent snows of the Greater Himalaya, Shimla (whose name is derived from the goddess Shyamala), was perhaps the grandest outpost of Empire and straddles an eight-mile long ridge, with buildings clinging to the green hillsides and is one of the most popular hill stations in India.

The British began coming here in the 1820s as a refuge from the summer heat on the plains. With all its intricacies, history seems to have been the mortar for every brick and stone that has built Shimla. The first house, built in 1822, is regarded to have been ‘Kennedy House’ which was the residence of Charles Pratt Kennedy, the newly appointed Political Officer to the Hill States.

By 1864, under the Viceroyalty of John Lawrence, Simla, nicknamed “The Queen of Hills”, was officially declared the ‘Summer Capital’ of the British Empire in India – a status it retained up to Indian Independence in 1947. 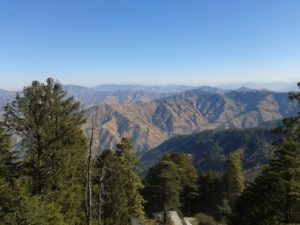 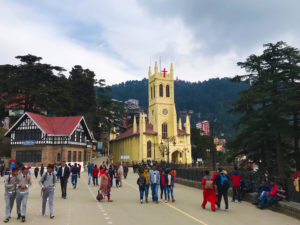 As a colonial summer capital, Shimla saw a spate of remarkable building activity in the town and some of the finest structures of the British-colonial genre still stand in the town, inspired by mainly European models, Swiss-Bavarian chalet forms or French windows. Tudor, neo-Gothic, English renaissance and Norman-Baronial jostled each other on the seven hills of Shimla. A stroll along the largely pedestrianised Mall takes you past some fine examples including Christ Church – the second oldest church in North India, the mock Tudor State Library, the General Post Office, Gorton Castle (built by a British official, which is dour Scottish baronial enlivened by Saracenic arches), and the medieval looking Town Hall to name but a few.

The British came to Shimla to play as well as to work. They skated on an ice-rink that still survives. At Annandale, a green clearing below The Mall, they built a racecourse where today the Indian army lands its helicopters. They played cricket in the rarefied air of Chail – at over 8,000ft, still the world’s highest cricket ground. Viceroy Lord Curzon laid out the perennially popular golf course at Naldehra just outside Shimla, a spot so beautiful he named his daughter after it. Above all, the British relished amateur dramatics at Shimla’s Gaiety Theatre, whose stage is still very active today.

In its heyday Shimla also attracted political leaders from Afghanistan, Tibet, China, Myanmar and other countries and several heritage buildings are witness to historical moments that have shaped the history of India. Leaders of the freedom movement led by Mahatma Gandhi frequently visited Shimla in pursuit of gaining Independence from British rule, and deliberations over the partition of India and Pakistan took place at Viceregal Lodge (now the Indian Institute of Advanced Studes) before India gained its Independence in 1947. 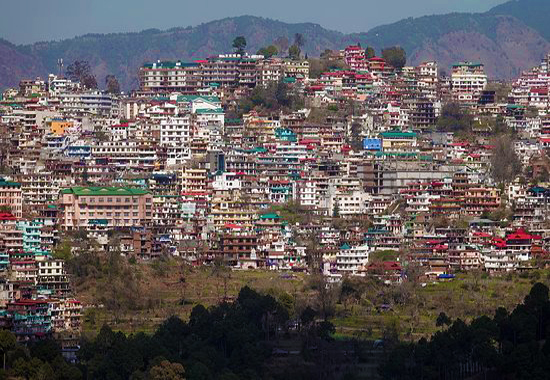 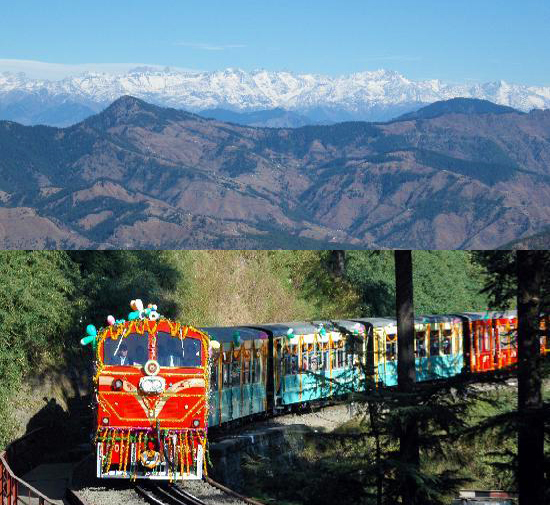 Interestingly, the Government of India ended up spending more time in this little town than in the ‘real’ capitals – Kolkata (earlier, Calcutta ) and later, New Delhi. The move to the hills was normally made in early April and the migration back to the plains took place in late October or early November. From 1871, the state government of the Punjab also began moving to Shimla from Lahore for the summer months.

Municipal governance was introduced as early as 1851, piped water was available from the 1880s, hydro-electric power was available in the early 20th century, and one of the world’s early ‘automatic’ telephone exchanges began functioning in Shimla in 1922.

An engineering marvel of its time and now a UNESCO-inscribed Word Heritage Site, the Kalka – Simla railway line was completed in 1903. As an alternative to taking the 4 hour train journey from Kalka to Shimla, take the two-hour ride from Shimla to Kandaghat, which shows you some of the best scenery (and engineering). Your car and driver can meet you to return to Shimla in an hour.

From 1947 to 1956, Shimla served as the state capital of the Punjab. In 1966, the district of Shimla was transferred to the state of Himachal Pradesh. The town of Shimla has since been its state capital. Shimla’s current municipal authorities value the town’s past – the entrance to a green-roofed pavilion in The Mall is inscribed “Our Built Heritage Is Our Identity, Let’s Preserve It” and a new heritage museum has recently opened.

Shimla is unique as an Indian city as it has a wide and traffic free main street, which stretches the length of the city. This pleasant open space is referred to as the Ridge as it extends the length of the ridge between the two hills of Shimla. Visitors will find themselves enjoying walking along the ridge with its traditional colonial architecture, fantastic views and an unhurried hassle free atmosphere, which is so uncommon in India. Sit and watch the world go by – Punjabi families parading in sparkling holiday best, Hindu holymen in orange robes, some of the town’s sizeable population of Tibetan refugees, and Gurkha solders in their wide hats with turned up brims (there are still large army cantonments in Shimla).

The Ridge ends at a smaller square known locally as Scandal Point and here is the junction of Shimla’s other main road, Mall Road, which runs parallel to the Ridge but along a lower terrace on the southern side of the hill. The most significant structure of Scandal Point is the colonial Post Office which still today is the State’s central office. The very name, Scandal Point, adds a hint of mystery to it. Romantic folklore has it, that during the British Era in 1892, Bhupinder Singh, the Maharaja of Patalia fell in love with the daughter of the Viceroy and they eloped from this point. The Maharaja was therefore banned from entering Shimla and later on he founded the new summer capital of Chail for himself, which is around 45 km from Shimla.

Walk: You’ll walk and walk, so wear comfortable shoes. As no traffic is allowed up to the levels of the main street, there are 2 lifts to take you from where your car can park, up to the main part of the town. Do remember to buy both your “Up” and “Down” tickets at the start, to save time and queueing later on.

Timings: Shimla has grown and expanded enormously in recent years, and the traffic getting to and from the lower part of the town to park, can be horrendous. Avoid rush hour and school run times at all costs – or leave plenty of time.

Read: Paul Scott’s Staying On for a brilliant evocation of pre- and post-Raj life in an Indian hill station.

Visit: Viceregal Lodge, The Army Museum at Annandale, and the small Gan Devta temple just a short walk away from the Museum.

Eat: An old-fashioned ‘Anglo – Indian’ meal with mulligatawny soup, ‘railway station’ mutton curry and trifle pudding at one of the ‘heritage hotels’. Book lunch at The Cecil Oberoi hotel with a window bay table overlooking the mountains and Shimla. Their Fish and Chips is also excellent!