Long before Rajasthan moved to the international travel map as an exotic and ‘much sought after’ destination, a Colonel James Tod merged admiration and history to write, ‘Annals and Antiquities of Rajasthan’ in the early 19th century. This was about that sandy part of north western India, which was home to the thirty-six royal races of princes, the Rajputs. Tod’s comprehensive work gave substantial detail to a fascinating part of India. The old term Rajputana, ‘the home of the Rajput princes and their principalities’, gave way to the word ‘Rajasthan’ and now, we know of this as a place where history is larger than life.

Rajasthan historical roots go back thousands of years with sites of the ancient Indus Valley Civilisation being located in the state. Its wonderful cities include the Pink City of Jaipur, the Blue City of Jodhpur and the White City of Udaipur. Built over prominence, the Golden city of Jaisalmer is focused around its yellowish fort that has been continuously inhabited for centuries and numerous excavations reveal towns that go back millennia. 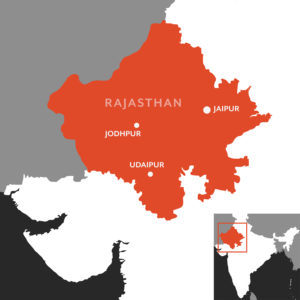 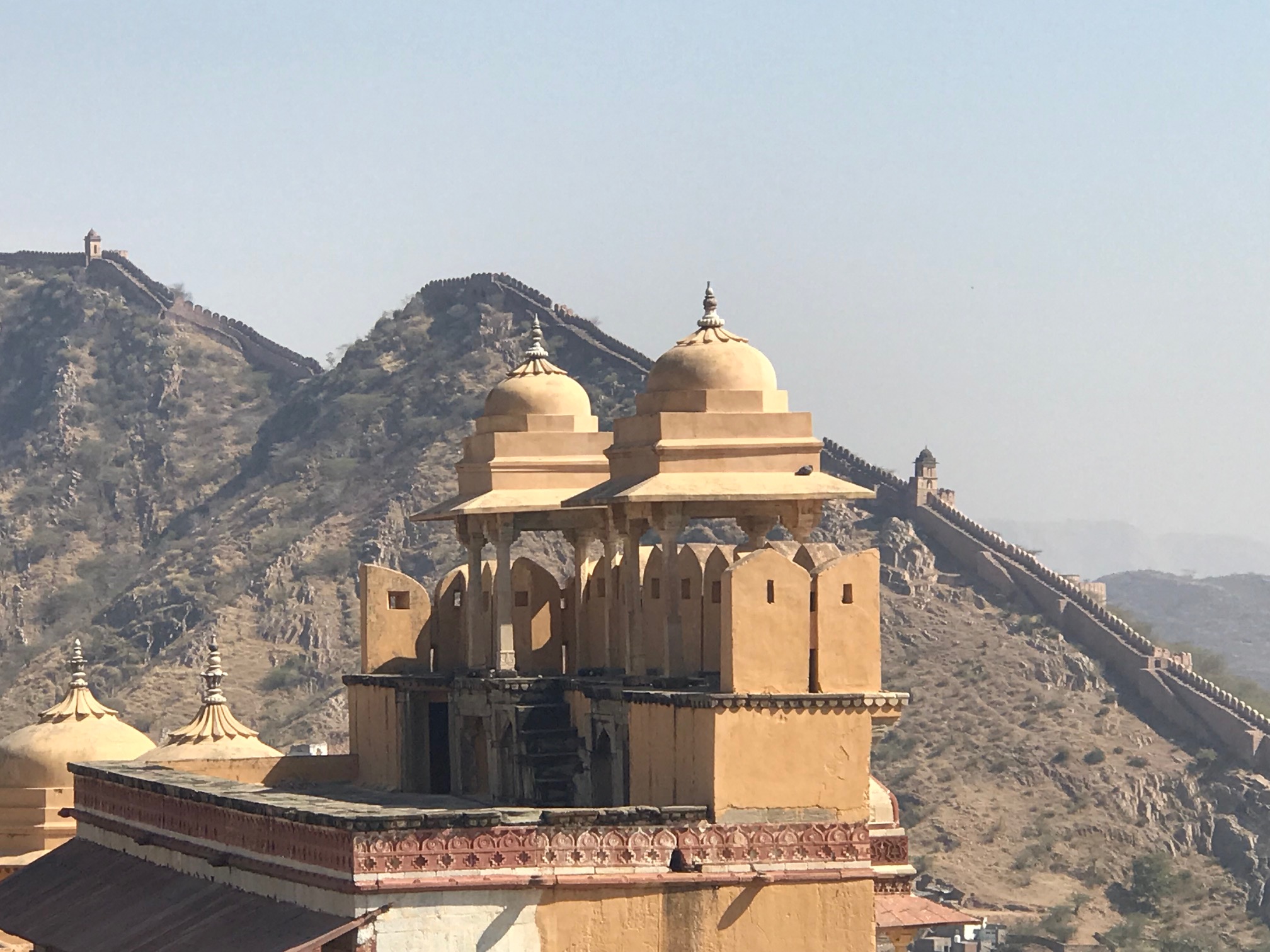 Literally translated as “The Land of The Kings”, Rajasthan is where even small talk will shift to much-admired ancestors and themes of bravery, valour and chivalry. Down the centuries, the Rajputs fought invaders, the Mughals and each other. Age-old battlements, chronicles in stone, colour, unmatched opulence, rare architectural individuality, and tales of valour, courage and hospitality are encapsulated in Rajasthan’s numerous forts and palaces and all across the little villages that lie past the sand dunes. This array of forts and palaces are now either magnificent monuments or are privately owned, and many have been converted into stunning hotels. Traditional architectural elements play such a large role in the ethos of Rajasthan that new resorts and hotels have been built along the lines of the old evocative structures – complete with Indo-Saracenic embellishments.

The terrain of Rajasthan is largely textured by the Thar Desert and the steady rolls of the Aravalli hills. Some themes across its towns are common, but many remain distinct. Rivers and irrigation canals criss cross some areas and substantial oases are created by lake-cities like Udaipur – which shot into prominence as a location for the James Bond film ‘Octopussy’.

Human habitation apart, Rajasthan’s nature is as diverse as its culture – a home to three tiger reserves – Ranthambore National Park (probably the most well known), the Sariska Tiger Reserve and the Mukundra Hill Tiger Reserve. Located about 175 kilometres from the state capital, Jaipur, the Keoladeo National Park near Bharatpur has a vast manmade wetland. Monsoon rains permitting, this is a bird reserve that, apart from its full-time residents, also draws numerous migratory birds from Siberia and elsewhere every winter.
For a mix of grand forts and royal palaces, stunning national parks and wildlife sanctuaries, beautiful heritage hotels, colourful vibrant cities, irresistible shopping and once-in-a-lifetime experiences like a candlelit dinner in the desert, ziplining over an ancient fort, and leopard spotting in the wilderness – Rajasthan is utterly unmissable. 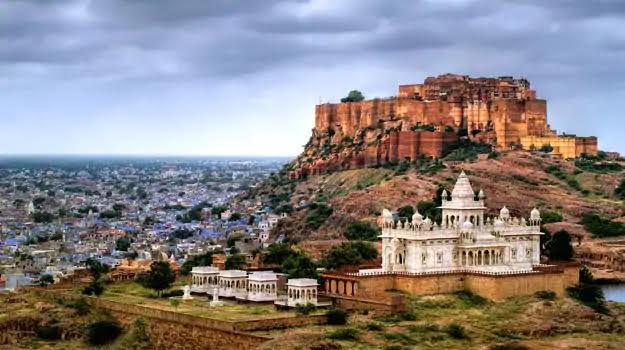 In the West, unlike, say, yoga, a relatively unknown aspect of Indian culture is ‘Vaastu’. This comprises of age-old principles of architecture that, among other things, specify design elements and placement, proportions and open spaces. Jaipur is perhaps the only complete city to be built on ‘Vaastu’ principles that are drawn from the ancient books, the Vedas. Today, many of Jaipur’s three-million residents cite this as the underlying reason for the prosperity of this 18th century city which was built over a period of four years by the ruler of Amer, Jai Singh II. Commercial and residential areas are thoughtfully integrated in its grid plan – which was one reason for Jaipur being designated as a UNESCO World Heritage City.

Popularly called the ‘Pink City’ on account of the many buildings that were painted that colour in 1896, to welcome Edward, Prince of Wales (later King Edward VII), Jaipur is one of India’s most visited tourist cities. This, along with Agra and Delhi forms the popular ‘Golden Triangle’. Jaipur is the administrative capital of the state of Rajasthan and is often the base for further travels in this enchanting desert state.

Jaipur’s numerous attractions include some magnificent examples of architecture – many of which are in the Indo-Saracenic style or have powerful colonial elements. The honeycombed five-floor high Hawa Mahal, or ‘Palace of Breezes’, is perhaps the most recognisable of these. There is the fine Albert Hall Museum, and several palaces – the City Palace is exemplary, as is the amazing and ancient Jantar Mantar Observatory nearby. The 1,000 year old Chand Baori in the village of Abhaneri is a remarkable stepwell that, engineering apart, is visually stunning. 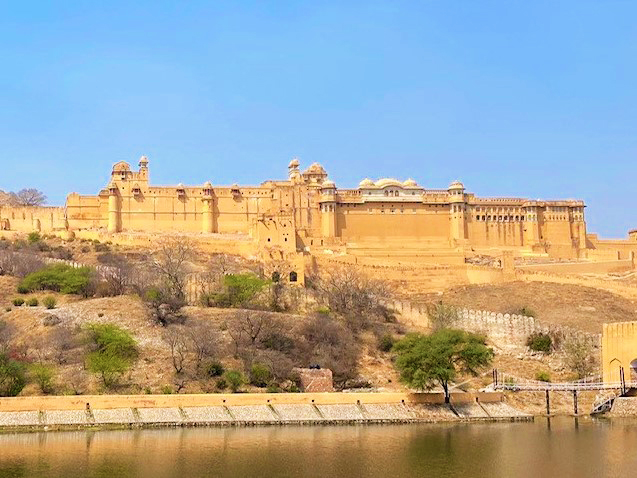 Amber, just outside Jaipur, was once the capital of princely Jaipur state, and the Amber Fort the residence of its Rajput rulers. Maharaja Man Singh I, who led Mughal Emperor Akbar’s army, commenced the Fort’s construction in 1592 on the remains of an 11th-century fort. Its architecture is a noteworthy fusion of Rajput (Hindu) and Mughal (Islamic) styles, and successive rulers added to Amber Fort before moving the capital from Amber to Jaipur in 1727. The Fort was declared a UNESCO World Heritage site in 2013 and is an absolute must visit.

The timeworn battlements of the immense Mehrangarh Fort dominate the fast growing and enchanting city of Jodhpur, set in the stark landscape on the edge of the Thar desert. Packed with secrets and intrigue, this is the nucleus of the old city, which in turn, is surrounded by a huge protective wall accessed through eight magnificent gates. Set in the geographical centre of the state of Rajasthan, Jodhpur was the capital of the erstwhile princely state of Marwar and was founded in 1459 by Rao Jodha, after whom the city is named. Despite it being surrounded by the sands of the Thar desert, its strategic location enabled its prosperity, and goods as varied as opium, metals and silk passed through the city. Descendents of its merchants, loosely identified after the place of their origin as ‘Marwaris’, are business leaders across India. 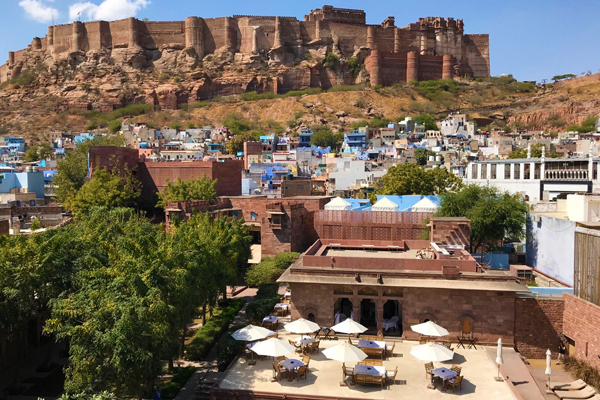 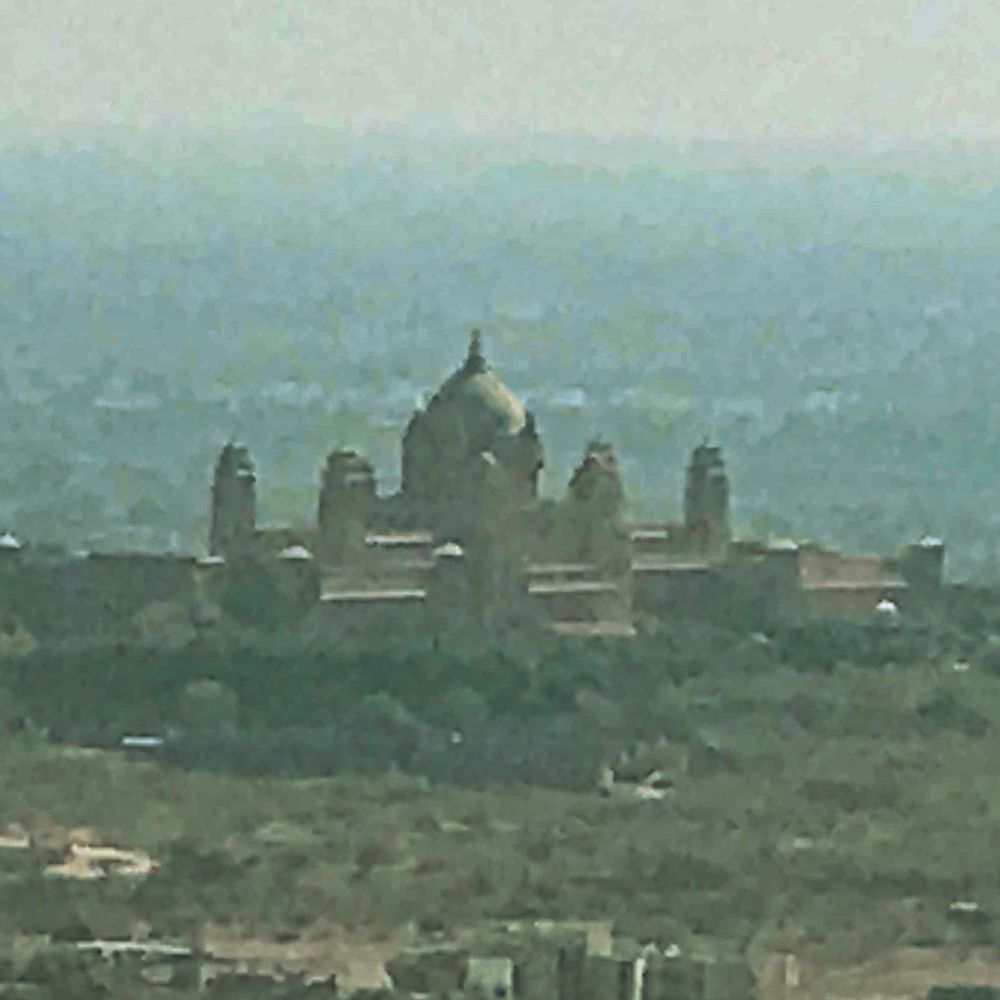 A great exposure to the arts, architecture and the wider world, came when the city became a vassal state of the Mughal emperor, Akbar, in the closing years of the sixteenth century. Later, under British rule, Jodhpur had the largest land area of all the princely states in today’s Rajasthan.

One of Jodhpur’s main icons is the huge Umaid Bhawan Palace and there lies a story. During the time of Maharaja Umaid Singh (1911-47) there was a great drought and he had been distributing alms to those in need. He soon realised that these measures were more cosmetic than substantial. He then began a whole series of projects that would provide employment to his subjects – roads, irrigations schemes and hospitals. The most ambitious of these was the building of the Umaid Bhawan Palace – the last of the great architectural performances to be enacted during the British Raj. From 1929, when its foundation stone was set, the project employed some 3,000 workers for a decade and a half. When complete, this was one of the world’s largest private residences and today, a section of the Palace is a Taj Palace hotel.

Jodhpur is known as the ‘Blue city of India’ due to the numerous buildings painted in this iconic colour. Its finely built cenotaphs and gardens, lakes and temples can pack a day for every visitor. The options for shopping are substantial and for authentic encounters with local vendors, stroll around the Sardar Market where a hubbub of bustling bazaars is tucked beneath the landmark Clock Tower in the old city. Visit the Clock Tower Market for the finest variety of spices, the Sojati Gate Market for Rajasthani handicrafts, jewellery, and tie and dye fabrics, or the Umaid Bhawan Palace Market – for classic antiques, metal work and a huge variety of handicrafts including dresses and footwear to handicrafts. Your stay in Jodhpur would be incomplete without a visit to the ancient Toorji Step Well and Square inside the walls of the old city to spend a few hours viewing this architectural wonder, enjoying a coffee or lunch at the Stepwell Café, and indulging in the gorgeous shops around the square.
Jodhpur has a longer history than Jaipur, having been established in the 15th century but isn’t as developed as the other big “metro” cities. It’s also relatively small compared to Jaipur, so feels more intimate, mellow and laid back, and has a good balance between tradition and modernity. All of which makes it one of our favourite cities in North India. 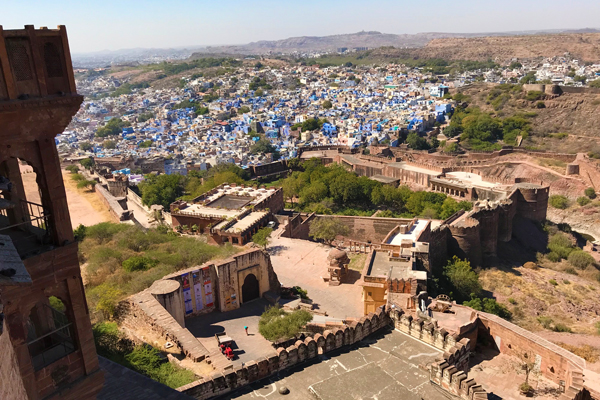 Udaipur is the historic capital of the kingdom of Mewar in the former Rajputana Agency. It was founded in the undulations of the Aravalli hills in 1558 by Udai Singh II of the Sisodia clan of Rajput, after the original capital city of Chittorgarh was lost to an invasion by the Mughal Emperor Akbar. It remained as the capital city till 1818 when it became a British princely state and thereafter the Mewar province became a part of Rajasthan when India gained independence in 1947.

The annals of the Sisodia family which ruled the state of Mewar, of which Udaipur was the capital, read like a roll call of honour and courage.

A succession of lakes, weave in and around the city, hence it being popularly known as the “City of Lakes”, and expectedly, the grand old forts and evocative palaces are a major draw. Colonel James Tod, the early 19th century traveller and historian went into raptures when he saw these palaces. In his Annals and Antiquities of Rajasthan, he called Udaipur the ‘most romantic spot in India’.

Architecture, galleries, museums, parks, places of natural beauty and numerous colourful fairs and festivals make Udaipur a ‘at least once in a lifetime destination’. It is now some two centuries after Tod’s ‘trumpet sounded to horse’ and he turned his back to the town. However, behind him has grown a bigger romance than he could have ever imagined. 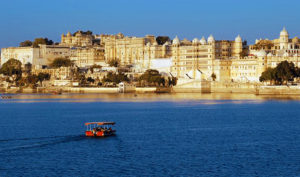 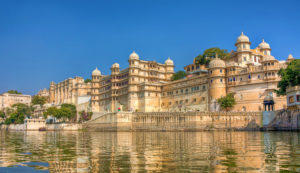 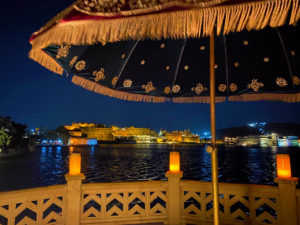 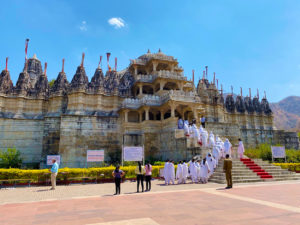 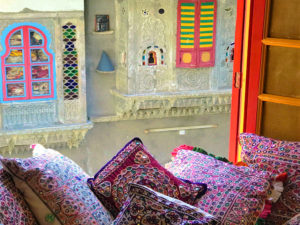